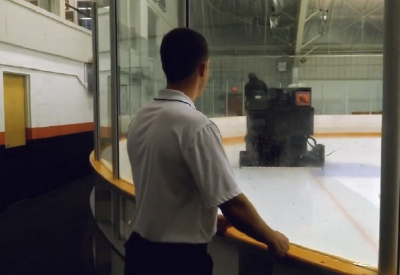 North Yarmouth Academy (NYA) is excited to announce the hiring of Tyler Walsh as the new varsity boys ice hockey coach. Walsh, a native of Bangor and a coaching legacy, is looking forward to returning to his home state. He currently serves as an Assistant Coach with the USA Hockey National Development Program U18 team in Plymouth, Michigan. Previous to his time there, Walsh was Director of Hockey Operations at Canisius College in Buffalo, New York.

Walsh now turns his efforts to NYA Panthers. “The recent success of the program and what Eric Graham has done during his tenure has put the program in a very good place. There is a chance to do something special at NYA this upcoming season and into the future. I have a great passion for hockey in the state of Maine as well as developing players moving on to the collegiate level. Maine is home for me. Always has been and always will be,” said Walsh.

Walsh grew up immersed in hockey culture. He is the son of former University of Maine hockey coach Shawn Walsh, who coached at the University of Maine in Orono (UMO) for 16 seasons and won two National Championships. His grandfather is Ron Mason, who coached at Michigan State and was the second winningest coach in college hockey. It was in UMO’s Alfond Arena, under the winning banners of his father’s teams, where Tyler’s coaching career began. For three years he was an Undergraduate Assistant Coach for the Black Bears under Coach Tim Whitehead. He went on to graduate from UMO with a B.S. in Business Administration, majoring in Management. NYA Athletic Director Jack Hardy finds no faults in Walsh’s impressive hockey background. “I heard wonderful things about Tyler Walsh during the search and interview process. It all proved to be true when the interview committee had the chance to meet him,” said Hardy. Past UMO Coach, Tim Whitehead and present US National Development Coach, Danton Cole communicated their support for Walsh. Aside from his vast knowledge of the sport, and his coaching skills, Coach Walsh will bring a great dedication and enthusiasm to our hockey program. “I believe his communication skills, personality, and ability to connect with his staff, parents, and student-athletes will go unsurpassed. Our hockey community is excited, and on behalf of everyone, I welcome him to North Yarmouth Academy,” praised Hardy.

Coach Eric Graham’s acceptance as an assistant coach at Bowdoin College left a void in the NYA hockey program that Hardy and Walsh are confident will be filled. “My plan for the team and program is to give the players the best chance at achieving their goals whether it is to play hockey at the collegiate level or wherever their passion may be. We will compete at the highest level while helping develop these young men on and off the ice. I am looking forward to building upon what Eric has done and really do something special for these players, North Yarmouth Academy, and hockey in the State of Maine. I am excited to be back in Maine and to be a member of the NYA family,” affirms Walsh.