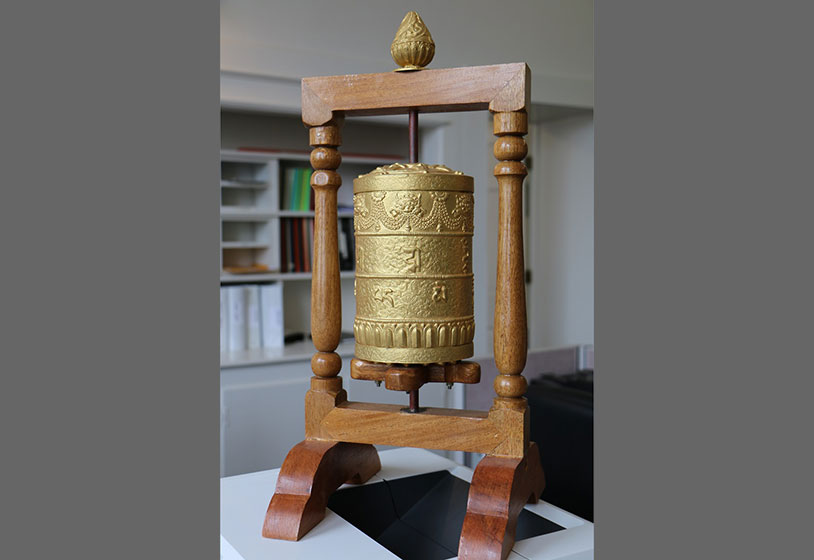 On Thursday, April 13, North Yarmouth Academy (NYA) will welcome Khen Rinpoche back to campus. Rinpoche is a Tibetan Buddhist monk and founding director of the Siddartha School in Ladakh, India. Rinpoche is visiting officially to present a Mani prayer wheel to the Academy. This traditional Buddhist wheel is filled with thousands of mantras which are the universal mantra of compassion. When the wheel is turned (clockwise), it releases these mantras of compassion into the world. NYA alumna Angmo Stanzin ’16, who was also a student of Khen Rinpoche in India, will accompany him for this blessing. It will take place in NYA’s gym at 10:15 a.m. All are welcome.

Rinpoche was born in Ladakh, India. In 1953, at fifteen years old, he walked over 960 miles to Shigatse, Tibet to join the Tashi Lungpo monastery. He returned to Ladakh to escape the religious persecution in occupied Tibet in 1960. Rinpoche was appointed abbot of Tashi Lungpo monastery in Bylakuppe, India by His Holiness the Dali Lama in 2005. Rinpoche is the founding director of the Siddartha School in his native village of Ladakh, India. The school serves children in preschool through tenth class, and its students include nomadic children and orphans of the remote Chang Tang area.

North Yarmouth Academy is an independent, college preparatory, coeducational school serving toddlers through twelfth grade students. Since 1814, NYA has fostered integrity, character and intellect in its students. For additional information, please contact NYA at 207-847-5423 or visit our website at NYA.org.