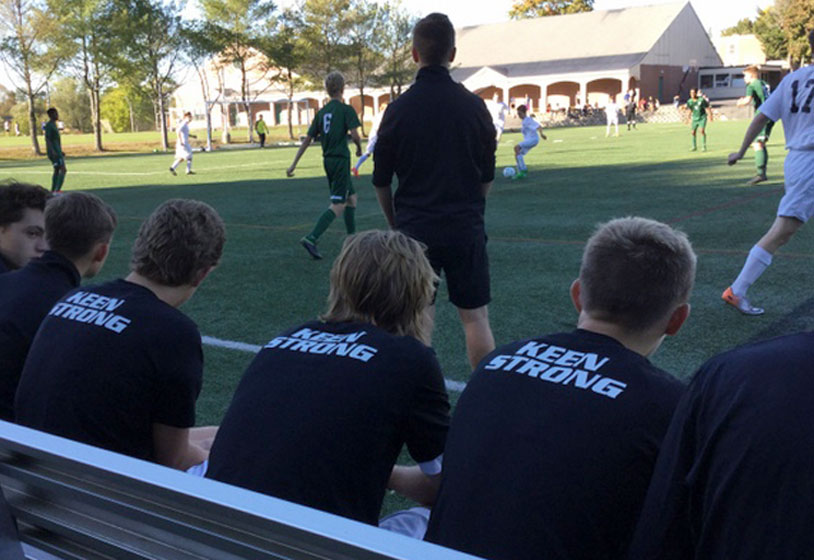 UPDATE: A message from NYA Athletic Director Jack Hardy, October 28, 2016, Yarmouth, Maine: Today’s #5 NYA’s boys soccer contest vs. #1 Monmouth has been postponed to Saturday, October 29. NYA’s varsity coach, Stuart Thorley – greatly respected by his players, leaves for New York tonight. He was to leave after today’s game and will be away through Monday. Due to the weather postponement, Coach Thorley will not be able to coach Saturday’s rescheduled game. Coach Thorley, in his words, is “devastated by this.”  He has no assistant, and has been coaching varsity and JV alone. Because of our situation, we have arranged special coverage for this important game:  NYA’s former varsity boys head coach Martyn Keen, who has been battling esophageal cancer for the past several months (chemo, radiation, and surgery), is happy to come in and manage the team, and has been placed on our MPA coaches eligibility roster. Watching and supporting the team throughout the season from the spectators’ side of the field, he has a nice handle on how we play and substitute.

While managing this arrangement, it has been important to me to know that our players will have no emotional let-down with this change in personnel. Both Coach Thorley and Coach Keen are greatly respected by these young men, and they are excited to play for either. They’ll be ready to take the field for tomorrow’s 1:30 game.

Last April, North Yarmouth Academy (NYA) boys varsity soccer coach Martyn Keen delivered news to the community that no one should ever have to give. He had been diagnosed with esophageal cancer. The summer in and out of hospitals for uncomfortable but necessary chemotherapy treatments kept Keen away from the sport he loved. “We’ve played with Martyn for many years, both at NYA and at Seacoast, and he’s always been a positive and highly influential figure to all of us,” said team co-captain Xander Bartone ’17. “He is a man who is very knowledgeable about the game of soccer, but more than that, he is someone who truly cares about his players and understands how to get the best out of them, both on the field and off.” 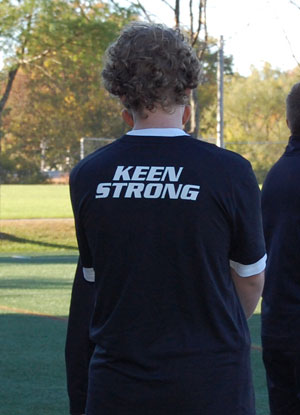 It became evident that coaching the NYA boys varsity team was not going to be possible for him this season when his surgery was scheduled on the same day preseason was to begin. Coach Keen stepped down, but not out. “I have managed to make it to every game, bar two, so the boys certainly know where my heart is!” said Keen. And they do. Keen proved that cancer can’t keep him from supporting the team, so it wasn’t going keep the team from supporting Keen. The team had “Keen Strong” warm-up jerseys made which they now wear at every game to let their coach know he is still on the sidelines with them.

“It was important for us to show that we are thinking about Martyn and supporting him even as he’s not with the team currently,” said Bartone. “We know that there’s nowhere he’d rather be than on the sidelines coaching. The battle with cancer is one that takes incredible courage and resilience, and we really wanted to show that we are in awe of the strength that Martyn possesses.”

“I’ve learned that many many people care about me,” said Keen of the jerseys. “I must have touched some lives along my journey. The fact that these boys took it upon themselves to make the Keen Strong shirts delighted but not surprised me!! This school and the families who support this institution are just wonderful!!!”

Martyn Keen’s most recent pathology results came back at the end of September with the excellent news that there is currently zero sign of cancer in his body.