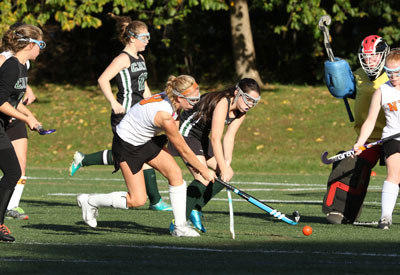 When the NYA Panthers field hockey team’s season came to an end last fall, Amber Rose ’19 (Falmouth) did not hang up her cleats for the year. She told Coach Sterling that she was interested in seeing how she could compete in the USA Futures Program, a developmental program for field hockey players. Rose tried out and was accepted. Twice a week she practiced at Husson University in preparation for the Regional Futures Tournament. Her hard work paid off as she earned a selection to the Northeast Regional team and a trip to the 2016 National Futures Championship in Lancaster, PA. 250 girls from across the country, including just four from Maine, competed from June 21-24 2016.  Rose’s team took bronze.

“I was honored to represent New England. At first, I was intimidated by the elite level of play I had not experienced before. I quickly adapted so I didn’t take the experience for granted, and I was able to improve my knowledge of the game. I am so grateful to have been part of such an ambitious team to have won the tournament’s bronze medal and the sportsmanship medal,” said Rose.

A couple of weeks later she received an invitation to play in the AAU Junior Olympics in Houston, TX. Only 125 girls were invited to this prestigious tournament and she was one of two girls from Maine. Excited, but not at all intimidated, she gladly accepted. “I was more confident going into this tournament because I knew the elite level of play that was expected.” After battling the top field hockey talent in the country and 110 degree Texas August heat for five days, Rose’s team stood atop the podium with gold in hand.

“My team and I were honored to receive the gold medal at the AAU Junior Olympic games after a nerve-wracking 2-1 win. I’m incredibly grateful for the opportunities I was able to experience this summer. I can’t wait to bring my passion, knowledge, and dedication to this year’s NYA field hockey team.”