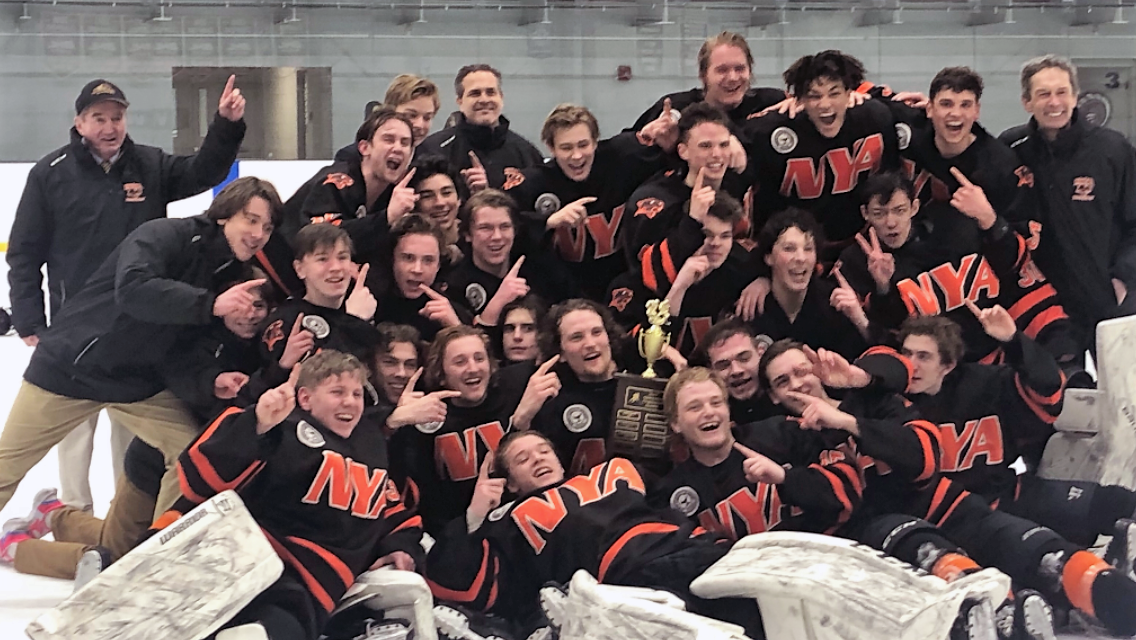 The North Yarmouth Academy Boys Hockey Team, a member of the New England Preparatory School Athletic Council (NEPSAC), defeated Pingree School 4-2 in the semifinals of the Holt Conference playoffs on Friday, February 28. On Saturday, the Panthers traveled to Massachusetts to face Worcester Academy in the finals. NYA defeated Worcester Academy 3-1 to win the Conference for the second year in a row. “I am proud of the players’ commitment to each other and the process through a demanding 34-game season. We played our best hockey on Friday and Saturday. It was certainly a great way for our team leaders to conclude their NYA career,” stated NYA Boys Hockey Head Coach, Mike Warde.

On Saturday morning, the Panthers departed Yarmouth for the Worcester Ice Center to square off against Worcester Academy for the championship game, and they returned with the Holt Conference Championship trophy for the second year in a row. The team was led by ten seniors and two post graduate students. “Our team leaders demonstrated each day what it takes to succeed,” said Warde. “At NYA, we are very fortunate to be able to recruit young men who are strong students, possess great character, and who are also excellent hockey players” stated Coach Warde.

As expected, the game was fast-paced and physical from the start. Both goaltenders were superb in the first period, and both teams went to the locker room knotted at 0-0. The second period did not disappoint. The reunited line of Damon Dulac ’20 (Mascouche, Quebec), Alexandre Saul ’21 (Montreal, Quebec), and Jared Buckner ’20 (Lakeland, FL) put NYA on top 1-0 as Buckner put in a rebound off a Saul wrist shot. The NYA penalty kill was then put to the test as Worcester Academy had multiple power play opportunities during the second frame. The best penalty killer for NYA was the goaltender Stefan Kulhanek ’20 (Vienna, Austria) as he kicked out several Worcester scoring bids which allowed Alexandre Saul to score a highlight reel shorthanded goal to give NYA a 2-0 lead after two periods.

The third period lived up to the hype. Senior Clement Delisle-Blais (Boucherville, Quebec) scored from an off angle as the Panthers gained a 3-0 lead. The NYA defense was tested often during the last ten minutes as Worcester Academy applied significant offensive pressure and eventually pulled their goaltender for a 6 on 5 advantage. “In the end, the two G’s in hockey prevailed yet again – Grit and Goaltending,” declared Warde. “Our young men met the challenges of a demanding program and season with courage and determination, and they should be very proud.”