Yarmouth, Maine, September 3, 2021: Serrene Karkos Gagnon ‘85 and the NYA Panther mascot will be inducted into the Edgar F. White ’38 Athletic Hall of Fame on Friday, September 17, 2021. The ceremony will take place at 10:00 a.m. during Friday Forum, NYA’s weekly school-wide community meeting. A luncheon for alumni, friends, and family will follow the induction ceremony. Please email alumni@nya.org if you would like to attend. 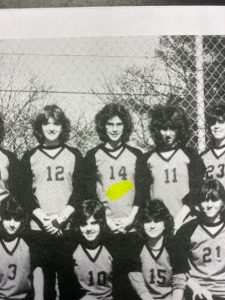 Gagnon was a four-year standout athlete on the varsity field hockey, basketball, and softball teams, serving as captain of all three teams her senior year. She led the field hockey team to an MAISAD Championship her junior year. As a key member of the softball team, Gagnon played catcher on the 1981 and 1982 teams that earned the MAISAD Championship. In basketball, she was a tremendous asset to the team’s success, as a starter her freshman year when the team (18-5) won the Western Maine Class D Championship, as well as the Class D Sportsmanship Award. During her sophomore year, Serrene was the team’s second highest scorer. In her junior year, she averaged 11 points per game and was a second team Class C All-Star, and during her senior year, Gagnon was first team Class C/D All-Star after setting a new Class D playoff record for field goals scored.

Gagnon was known equally for her athletic prowess and leadership. Anne Johnson, former college guidance counselor at NYA, said, “Serrene led the way to set an example for her teammates. She focused on team play and inspired her teammates by her own performance on the field. Her coaches regarded her as a mature young woman in whom they could confide and on whom they can rely.”

Following her graduation from NYA, Gagnon attended University of Maine Farmington (UMF) where she was a leader on the field hockey, basketball, and softball teams all four years of her college career. She was a member of the 1985 and 1988 UMF field hockey teams that won the NAIA District 2 championship and captained the 1988 team. As a four-year member of the softball team she played center fielder and had a .332 career batting average.

From 1991 to 1997, Serrene taught sixth grade math at NYA, served as the assistant athletic director, and coach of JV and Middle School field hockey, lacrosse, and basketball teams. In 1996, she took over as head coach of the girls basketball team following the late Steve Morris.

She currently lives in Poland, Maine, with her family and is an educator at Bruce M. Whittier Middle School.

Gagnon’s dedication both in the classroom and in athletics has brought distinction and pride to the Academy. 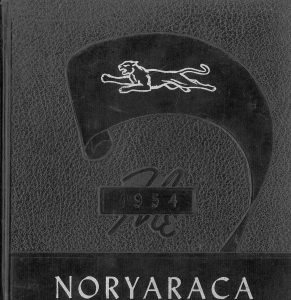 On the 70th anniversary of the Panther becoming the North Yarmouth Academy mascot, the Panther will be inducted into the Edgar F. White ‘38 Hall of Fame.

In 1951, Dave Tamminen ’52, a writer for the school newspaper, began to use the named “Black Panther” in print when referring to the basketball team, and it stuck. By 1954, the Black Panther was widely accepted as the NYA school mascot.

While the Panther image and mascot costume has changed over the years, it has remained a strong rallying cry for the Academy.

In recognition of the pride, entertainment, and joy the Panther has brought to fans and athletes for 70 years, NYA is pleased to induct its school mascot into the Edgar F. White ‘38 Athletic Hall of Fame. During the ceremony, Dave Tamminen ‘52 will be recognized for his role in bringing NYA its mascot.

North Yarmouth Academy is an independent, college preparatory, coeducational school for toddlers to post graduate students with an enrollment of over 370 students. Since 1814, NYA has fostered integrity, character, and intellect in its students. For more information, please contact NYA at 207-847-5423 or information@nya.org.

Alumni at the Helm of NYA Lacrosse