Home About Our People Senior Staff

The senior leadership team at North Yarmouth
Academy is responsible for the daily operations,
oversight, and leadership of the school. 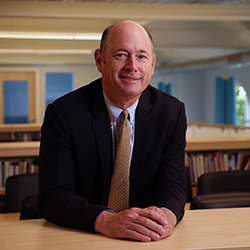 Ben Jackson became Head of School at NYA in 2015. Ben has 25 years of experience in independent schools as English and history teacher, baseball and basketball coach, mock trial coach, dorm parent, board member, parent, and administrator. Prior to joining NYA Mr. Jackson served for 10 years as Head of School at Evergreen Country Day School. Ben earned his BS in Political Science from Hobart College, MA in American History from Providence College, and a M.Ed. Leadership from Regis University. Ben previously served on the faculty at The Wheeler School in Providence, RI; Friends Academy in North Dartmouth, MA; and St. Andrews School in Barrington, RI. 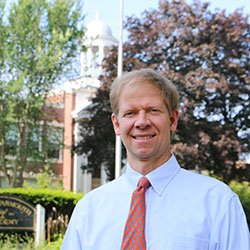 Originally from the granite state of New Hampshire, Eric began his independent school career back in 1990, a long ago time that preceded e-mail. Eric received a B.S. in Physics from the University of New Hampshire and a M.S. in Environmental Management and Policy from Rensselaer Polytechnic Institute. After teaching for several years at an independent day school in Maryland and two larger boarding schools in Massachusetts, Eric moved to Maine with his family in the summer of 2000 and began teaching mathematics and physics at NYA that fall.  Throughout his time since at NYA, he has served in many capacities, most recently as Interim Head of Upper School, Math Department Chair, physics teacher, senior class advisor, and a coach of several sports including track and basketball.

In addition to serving as the Head of the Upper School, Eric continues to teach AP Calculus, a course he feels supports students in retaining a lifelong appreciation of mathematics.  He thoroughly enjoys his work with the students, the families, the faculty, and the staff at NYA, a school he considers to be among the finest independent day schools in all of New England.  Eric is also a father of two NYA alumni, Hannah ’15 and Sarah ’17. 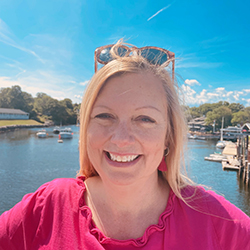 Marissa Markonish
Head of the Lower and Middle Schools
207.847.5431
mmarkonish@nya.org

Marissa Markonish joined the staff at NYA in 1995, teaching Latin in both the Middle and Upper schools, and became Chair of the Modern and Classical Language Department in 2004. She holds a BA in Classics from Wesleyan University in Connecticut and an MAT in Latin and Classical Humanities from the University of Massachusetts, Amherst. She spent a year teaching Latin at Seabury Hall on Maui before settling down in Maine. Marissa moved into the role of Head of Middle School in 2010 and helped to open the Lower School in 2013. In her current role as Head of Lower and Middle Schools, she enjoys implementing an engaging and dynamic program for our students from Toddler through eighth grade. Marissa’s husband Ross is Chair of the English Department and they have two children, Alex (Class of 2019) and Luke (Class of 2023). 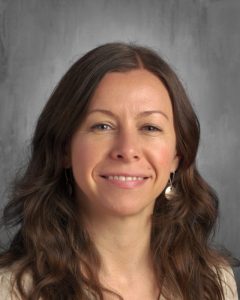 Amy came to NYA in 2022 from the Maine Technology Institute where was a Senior Invstment Officer.  Prior to this, she was the CFO of Risingtide Cooperative, a non-profit grocery store coop. She was also an analyst for RBS, Private Equity Group. She began her career as a teacher. She earned her BA in Education from Rudolf Steiner College, a BS in Botany and Plant Pathology, and an MA in Educational Psychology from the University of Texas-Austin. She has also earned an Executive Business Management Certification from Yale. She served on several different boards and community organizations including the Damariscotta Board of Selectmen. Her two children currently attend NYA. 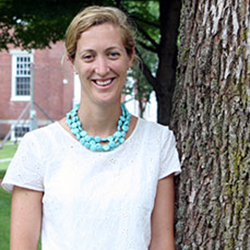 Ashley Randlett joined the NYA team in 2015 as the Director of Admission, completing her journey back to Maine. A Belfast native, she fled the snow after high school to attend Mary Washington College in Fredericksburg, VA. In addition to graduating Cum Laude with a B.S. in Business Administration, Ashley was a four year member of the swim team. After a brief foray into the business world, Ashley realized she was best suited for the non-profit sector and began her career as an independent school admission officer, first at Garrison Forest School in Owings Mills, MD and most recently at The Providence Country Day School in East Providence, RI. Swimming, running, biking and skiing are just a few ways Ashley likes to spend her down time. 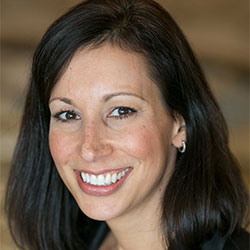 Jennifer joined NYA in 2017 as the Director of Development. She came to NYA from Bates where she was the Assistant Vice President for College Advancement, helping to lead the launch of the College’s $300 million fundraising campaign. Immediately prior to her ten years at Bates, Jennifer served as Director of Development for United Way of Androscoggin County and before that as the Associate Director of Communications at Franklin W. Olin College of Engineering in Needham, Mass.

Jennifer holds a B.A. in English and Media Communications from Assumption College where she was a member of the women’s tennis team and the International English Honor Society, Sigma Tau Delta.

Jennifer is a Maine native who currently lives on Sebago Lake with her husband and three sons. She enjoys skiing, boating, hiking and travel. 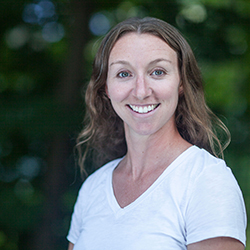 This is Kelsy’s first year as Athletic Director at North Yarmouth Academy. She holds a BA from Roanoke College where she was a member of the varsity soccer and varsity basketball programs. While working towards a MA in Physical Education, Athletic Administration from Springfield College, Ross coached with the women’s soccer program and worked as a graduate assistant in the equipment room. She was most recently the Bates College Head Women’s Soccer Coach and lecturer in the Bates Physical Education Department. 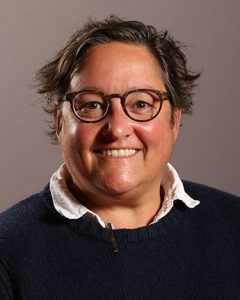 Lynn joined the NYA coaching staff in 1996 and the History Department in 1998. Initially pursuing a career in public relations and journalism, an accidental subbing job at local private school pulled Lynn into the world of teaching. During her time at NYA, Lynn has fulfilled many duties – College Guidance Counselor, Senior Speech advisor, coach, Student Activities Coordinator – currently she is the Dean of Students, a position she assumed in 2017. She currently teaches US History and Current Political Issues. A native of Freeport, Lynn earned a B.A. in History from Colby College, where she was a four-year member of the women’s lacrosse team. In 2002, she earned a Master’s degree in American and New England Studies from USM, writing her thesis on the economic transformation and historical invention of Freeport.

When not absorbed in all things NYA, Lynn enjoys cold weather, being on the water, and raising poorly behaved dogs. 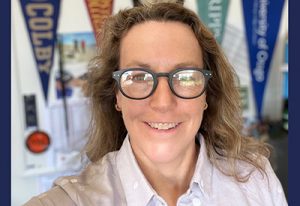 
A graduate of Colby College and a lifetime Sugarloafer, after a 20+ year absence, Gretchen was thrilled to return to Maine full time in 2018. She left her first “real” job as Assistant Dean of Admissions at Colby to embark on an adventure that started with a graduate program in New England Studies at the University of Southern Maine. Following USM, she accepted a position at Patagonia taking her to Seattle, WA; Sydney, Australia; Truckee, CA; and Reno, NV. After 11 years with Patagonia, she accepted a position as Director of College Counseling at Sage Ridge School in Reno. Eventually, opportunity and adventure led Gretchen and her family back east to New Hampshire where she was an Associate Director of College Counseling at Phillips Exeter Academy.  In 2018, she was appointed Director of College Counseling at Kents Hill School and moved back to Maine with her husband, Stefan, and dog Mac while their two children visited when work and schooling permitted. At Kents Hill, she also served on the Head of School’s Leadership Team, the Academic Program Team, the Student Experience Team, the Admissions Committee, and coached Rec Skiing. She is thrilled to be at NYA and eager to learn more about the community and to meet her new students and colleagues. 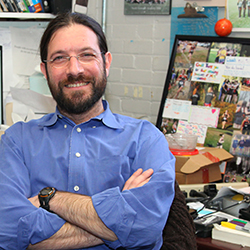 Christopher Mazzurco has been a member of the North Yarmouth Academy community since 1996.  During his time at NYA he has held the position of Director of Information Technology.  Along with his duties of keeping the technology operations running smoothly on campus, he has spent much of his time teaching and coaching NYA student athletes. In addition to being a student advisor, Christopher is a three-season coach for Girls Varsity Cross Country, Boys & Girls Varsity Indoor Track, and Boys & Girls Varsity Outdoor Track & Field.

Chris graduated with a BA in Astronomy, Physics, and Archaeology from Wesleyan University in Connecticut.  While working in each of those disciplines, technology integration was always at the forefront of his work.  At NYA, Chris’s focus has been on providing a sustainable environment that allows for meaningful integration of technology at all levels of education. 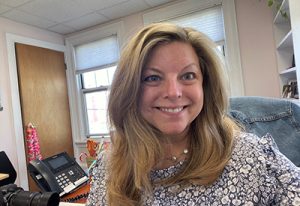 Kristi is a graduate of Flint Hill School in Oakton, Virginia and has a BA in Psychology from Davidson College. She moved to Maine from North Carolina in 2000 to join the Maine Chapter of the National Multiple Sclerosis Society where she managed the MS 150 Bike Tour and other events and became Director of Development. Prior to the MS Society, she worked in development at Davidson College and the University of North Carolina at Wilmington. She is the president of the Northern New England Chapter of the Davidson College Alumni Association.

Kristi lives in Yarmouth with her husband and their two daughters. She divides most of her free time between Crescent Lake and Chebeague Island.